The African Continental Free Trade Area, popularly known as AfCFTA is a free trade area founded in 2018, while its full implementation commenced in January 2021.

AfCFTA was created by the African Continental Free Trade Agreement – an agreement that has been dutifully signed by 54 of the 55 African Union countries. The AfCFTA agreement was brokered by the African Union (AU) and was first signed by some AU Member States in Kigali, Rwanda on March 21, 2018. The agreement requires Member States to remove tariffs from about 90% of goods, allowing free access to commodities, goods, and services across the continent.

The free trade area is the largest in the world in terms of the number of participating countries since the formation of the World Trade Organization. It connects 1.3 billion people across 55 countries with a combined gross domestic product (GDP) of about 3.4 trillion US dollars.

As port terminal operators, we believe that AfCFTA will boost intra-African trade. Some pundits believe that trade between African nations will rise by as much as 50 per cent within the first year of AfCFTA implementation.

The general objectives of the free trade agreement are as follows:

The scope of AfCFTA is huge and the trade pact holds a lot of promises and opportunities for Africa and Africans. It is envisaged to reduce tariffs among member countries and cover policy areas such as trade facilitation and services, as well as regulatory measures such as sanitary standards and technical barriers to trade.

The full implementation of AfCFTA will reshape markets and economies across the region and boost output in the services, manufacturing and natural resources sectors.

The creation of the vast AfCFTA regional market is a major opportunity to help African countries diversify their exports, accelerate growth, and attract foreign direct investment.

AfCFTA has the potential of lifting up to 30 million people out of extreme poverty, and raise the incomes of 68 million others who live on less than $5.50 per day. The World Bank estimates that West Africa will see the biggest decline in the number of people living in extreme poverty – a decline of 12 million – as a result of the implementation of AfCFTA.

With the implementation of AfCFTA, trade facilitation measures that cut red tape and simplify Customs procedures would drive $292 billion of the $450 billion in potential income gains. AfCFTA will also help usher in the kind of deep reforms necessary to enhance long-term growth in African countries.

I must emphasize again that trade facilitation is at the heart of the successful implementation of the African Continental Free Trade Area Agreement. If Nigeria is to reap its share of benefits from AfCFTA, it must redefine its posture towards inter-regional trade and address inherent and systemic debilitating factors that hamper trade.

To facilitate trade is to reduce the transactional costs associated with institutional trade barriers by streamlining policies and procedures required in conveying goods from one country to another to make trade across borders faster, cheaper and more predictable, whilst ensuring its safety and security.

Trade facilitation, from the standpoint of port operation, depends on the following measures:

In 2006, the Federal Government embarked on a port reform programme. An integral part of the reform was the concession of terminal operations to reputable private terminal operating companies.

Before the concession, port infrastructure had deteriorated; cargo-handling equipment were grossly insufficient. The available equipment were outdated and malfunctioning due to poorly trained manpower, corruption in the equipment procurement process, and poor maintenance.

The ports were poorly maintained and poorly managed. Ships were made to wait for as much as 45 days after arriving Nigeria before they could berth. Consignees were made to go through harrowing experiences and had to wait for up to 60 days to find their cargo among poorly arranged stacks. The hapless consignees had to pay bribes to take delivery of their cargoes when they eventually locate them. The ports were very porous, security was lax, giving unhindered access to all and sundry. Wharf rats were the kings of the port at the time.

Before the concession, the port was compromised by multitudes of individuals who had taken habitation in various terminals and sheds. The poor access restriction resulted in rowdiness and cargo theft. There were frequent complaints of untraceable or missing cargoes at the stacking area.

During those dark days, shipping lines employed the services of third party equipment hirers even after paying for the same service inside the port.

The government of the day, in its wisdom, decided that port concession was the only option available to change the narratives. The port concession programme was therefore carried to achieve the following objectives:

I am glad to note that the objectives of the port concession exercise have been fully realised. The exercise has resulted in significant improvements in port operations in Nigeria.

Terminal Operators in collaboration with the Nigerian Ports Authority have improved the state of the ports in terms of security, quay and yard infrastructure, navigation channels, productivity and efficiency.

The efficiency of our ports has improved multiple folds. Vessel waiting time has since been eliminated resulting in significant savings for importers and exporters. Government now generates revenue in trillions of Naira – through the tax authorities, Customs, NPA and NIMASA – as against the few billions generated before the concession.

The concession, without a doubt, has increased the competitiveness of our ports and enhanced movement of goods across international borders.

However, despite the tremendous improvements recorded in port operations – especially in the provision of marine services and cargo handling operations – we still face enormous challenges in our trade facilitation drive, which has remained sub-optimal. The reason for this lies in Customs processes, the regulatory environment and poor logistics infrastructure.

Over the years, Nigeria and other African countries have acknowledged the importance of trade facilitation and have signed numerous trade facilitation agreements at bilateral, sub-regional and regional levels. However, most of these initiatives, despite being robust and ambitious, have yielded very limited benefits to the trading community.

We have a situation where people must visit the port physically to do their Customs documentation and cargo examination before they can take delivery of their consignments. This is not inefficient. The Nigeria Customs Service should do everything possible to install functional scanners at the port to reduce the high rate of physical examination of cargoes and to reduce human contacts. I am aware that Customs recently deployed a scanner each to Apapa, Tin Can and Onne ports. This is a good development but a lot more scanners will need to be acquired considering the volume of cargoes at those ports and also to cover other port locations and border posts.

The deployment and use of scanners for cargo examination will reduce human contacts, reduce arbitrariness and cut down on cargo dwell time.

In addition to acquiring scanners, Customs should use technology to drive its processes. It is time to actualise the e-Customs project, so that consignees can do their documentation online and make necessary payments to Customs and other government agencies without having to physically visit the port.

One wonders what has happened to the much talked about National Single Window!

Consignees are made to contend with several government agencies while processing the clearance of their cargoes at the port. Multiple port charges imposed by these agencies are also a major hindrance to trade.

Corruption among government officials in and around the port is a pervasive problem, not just in Nigeria, but also in several other African countries. Corruption discourages trade because it causes traders to pay higher fees on their goods before final clearance. This results in higher priced goods and commodities in the market.

High transportation costs coupled with poor road and rail infrastructure rank high among the major reasons for the low competitiveness of the Nigerian economy. Oftentimes the cost of transporting goods within the country and across borders is extremely high and traders encounter bureaucratic bottlenecks that cause delays. This also has the effect of increasing the cost of products and reducing the shelf life of perishable goods, which lowers their market value. This impairs the value of our non-oil export.

A recent report indicated that it costs more to transport a container from one part of Nigeria to the other than to ship the same container from Europe or the Far East to Nigeria. 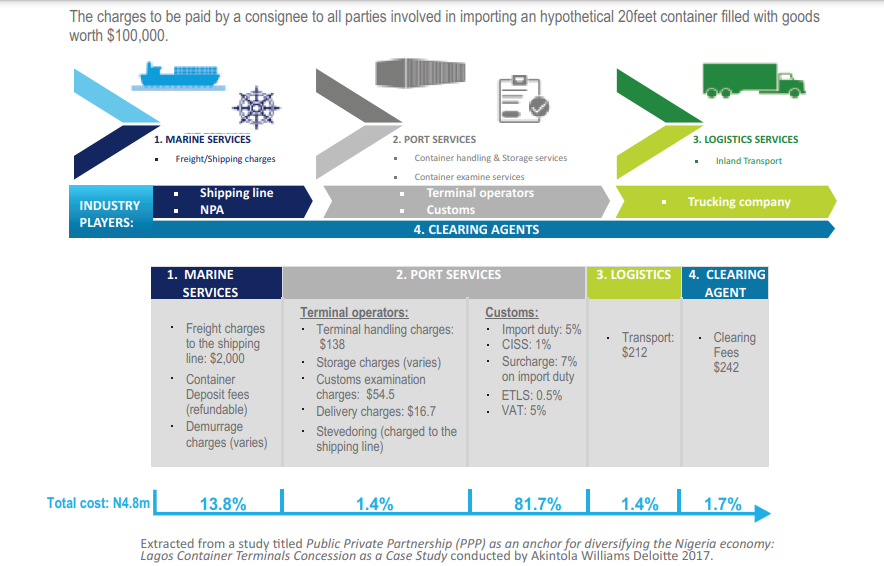 A study conducted by Akintola Williams Deloitte in 2017 blamed the high cost of doing business at the nation’s seaports on the Nigeria Customs Service and other government agencies. The study claimed that Customs processes are responsible for not less than 82.1 per cent of the charges incurred by consignees. It said Shipping Companies are responsible for 13.8 per cent of the port cost; Terminal Operators 1.8 per cent; Transporters 1.1 per cent and Clearing Agents 1.7 per cent.

The African Continental Free Trade Area Agreement is a good idea that would lead to a reduction in tariffs and enhance intra-African trade.

Customs processes must be simplified and automated. The multiplicity of Customs units deployed all around the ports, the port gates and even on the roads to intercept cargoes already cleared from the port is not particularly healthy to trade.

Our roads must be made motorable, the rails and waterways must be effectively used for movement of persons and goods.

The numerous government agencies extorting money and increasing the cost of doing business at the port must be tackled decisively, while the security operatives that have turned truckers to their ATM on the road must be called to order.

Simply put: Nigeria must make it easier to move goods from one part of the country to the other, while working with other ECOWAS countries to achieve the same outcome at the regional level.